JOVIA is sweet like sugar but has Zero calories.

Use it to sweeten your drinks or food without worrying that it will end up on your waist or your thighs.

It is a dream come true for the health-conscious, who prefer a low-calorie and natural diet, and for people who need to avoid sugar due to diabetes mellitus.
One sachet of JOVIA provides the same sweetness as two teaspoons of sugar. 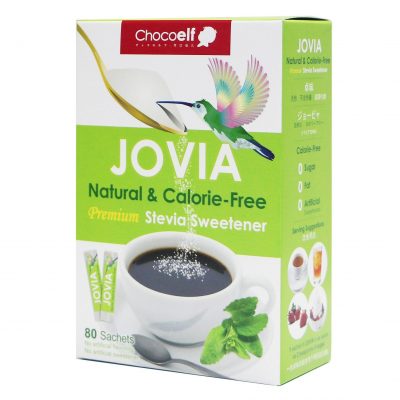 The Sweetness of JOVIA – Reb A
The sweetness found in stevia comes from several natural substances called steviol glycosides.

Rebaudioside A which represents 2 to 4% of the leaf is the sweetest (350 to 450 times sweeter than sugar) and least bitter molecule of these steviol glycosides.

JOVIA contains premium Reb A of at least 97 % purity, thus giving it a superior sweetness. As steviol glycosides such as Reb A are non-fermentable and non-digestible, JOVIA has zero calorific value.

The Making of JOVIA
In the whole plant, steviol glycosides build up as the plant grows, with older leaves being sweeter than young leaves from the top of the plant.
When making JOVIA, pure water-based technique is used to extract Stevia in its most natural essence. The older leaves are first harvested and dried under the sun. They are then milled and steeped in water using a brewing method that is similar to brewing tea. After immersing the leaves in water, a special filtration system is used to concentrate and purify the extract. This extract then undergoes spray drying and crystallization to form JOVIA.

How sweet is one sachet of JOVIA?

One sachet of JOVIA provides the same sweetness as two teaspoons of sugar.

Has Stevia been approved by FDA to be used as a sweetener?

In 2010, Singapore’s AVA approved JOVIA for use as a stevia-based table-top sweetener in view of FDA’s findings, making JOVIA the #1 stevia in Singapore.

Is JOVIA safe for cooking?

It is safe to cook with JOVIA because it is heat-stable at temperatures up to 200°C.  You can also sprinkle it on confections like tarts, pies and cooked dishes.

Is JOVIA safe for kids?

Different amounts of Rebaudioside A have been tested at various stages of human growth.  All studies have shown it has no harmful impacts on human development.  Moreover, Reb A is not absorbed into the body and is excreted naturally. So, Reb A can be consumed by everyone, kids included.  However, growing children need specific types of calories for development and using sweeteners is not necessary.

Is JOVIA safe for use in diabetics?

Yes. JOVIA is safe for people with diabetes. Its sweetness has no effect on the glycemic index and the blood sugar levels will not be affected in any way.

How does JOVIA play a role in managing weight?

Our weight is determined by our daily intake of food and our daily energy expenditure.  Every cube of sugar that is replaced by JOVIA will lower your daily calorie intake.  One cube of sugar has 20 calories while a sachet of JOVIA offers the same sweet taste with no calories. JOVIA can be used alongside a balanced diet to lose or maintain weight while still satisfying the sweet tooth.

How is it possible for JOVIA to be Calorie-free?

One sachet of JOVIA contains 97% pure Rebaudioside A and erythritol.  Reb A is a natural sweetener without calories. Once ingested, our body eliminates it naturally.

Erythritol is a polyol, or a substance present in many fruits like melons and grapes.  It is naturally calorie-free. That is why JOVIA contains zero calories.

What type of packaging does JOVIA come in?

JOVIA comes in boxes of 80-sachets, which are suitable for home or office users.

For Food Service providers like hotels and cafes, the 800-sachets bags are available.

What is the process used to make JOVIA?

We use purely water based technique to extract Stevia in its most natural essence. The leaves are first harvested and dried under the sun. They are then milled and steeped in water using a brewing method that is similar to brewing tea.

After immersing the leaves in water, a special filtration system is used to concentrate and purify the extract. This extract then undergoes spray drying and crystallization to form JOVIA.

No. While Reb A comes from a plant, the stevia plantations are not certified organic plantations.

What makes JOVIA taste so nice?

JOVIA is the #1 stevia approved by AVA and is made of extremely pure Rebaudioside A (97%). Reb A is a natural part of the Stevia plant that has a sweet taste with zero calories. The high quality of our product gives it a clean and unique sweetness that lasts longer on your tongue.

What makes JOVIA a premium?

JOVIA is premium because the Reb A we use to make it is 97 – 98% in terms of purity. This is only achievable with a longer purification process. And everything ingredient that goes into JOVIA is natural with no artificial substances.

What does JOVIA contain?

JOVIA contains an extract from stevia, a South American plant that is naturally sweet and calorie-free.  JOVIA uses the purest extract of the stevia plant called Reb A 97 (or Rebaudioside A of 97% purity) and other natural ingredients that make it look and taste like sugar.  Reb A is the sweetest and the least bitter extract from stevia leaves.  It is 300 times sweeter than sugar. JOVIA is perfect for sweetening hot beverages, dairy products or fruit salads. Erythritol is used for bulking in JOVIA.

What is the Stevia Plant?

Stevia lives in grassy areas called “Campio Limpios.” It can be harvested no more than five years, with 3 to 5 harvests yearly.  With a good irrigation system, one hectare can hold 100,000 plants that can produce 1,000 to 1,200 kg of dried leaves (naturally) and 60 to 70 kg of steviosides.

The plants are cut after 90 days once flowering begins right before the concentration of stevio glycosides starts to drop.  The entire leaf has a bitter taste somewhat similar to licorice.

What is the History of Stevia?

The Stevia Rebaudiana Bertoni plant (commonly called stevia) is a member of the Chrysanthemum family. Stevia cultivation began in Paraguay, where it is called “Ka’a He’e” (“Sweet Herb”). The early Guarani Indians knew about stevia’s sweet leaves more than two centuries ago, and they used the leaves to make herbal infusions called mate.

Stevia is often described as “the sweet herb of Paraguay” and is known as the “sweetest plant in the world.”  Names like these show just how powerful this herb is. Stevia first became known in Europe in the 16th century when Spanish governors learned about a “herb as sweet as honey” used by the indigenous populations of South America.

Around 1908, the presence of several sweeteners in stevia was documented, but it was not until 1931 that researchers were able to isolate steviosides. During WWII, allied countries tried to extract stevioside for commercial purposes as an alternative to sugar, which was in short supply.  Unfortunately, the technology required for industrial production was not available then.

In Japan, restrictions on the use of artificial sweeteners enforced in 1970 led to a rapid rise in research on the marketing and use of stevioside. For over 50 years now, Japanese consumers have been using this calorie-free plant extract with no health risks.  Today, it is the most widely used sweetener on the Japanese and Korean markets.

What is the Erythritol in JOVIA?

Erythritol is an all-natural and non-caloric ingredient that is used to provide bulk for JOVIA. Bulking agents are additives that increase the bulk and contribute to the texture of a food. Erythritol has been part of the human diet for thousands of years as it is present in fruits such as pears, melons and grapes, as well as foods such as mushrooms and fermentation-derived foods such as wine, soy sauce and cheese. It is added to foods and beverages to provide sweetness, as well as to enhance taste and texture.

close
close
Start typing to see products you are looking for.